Lionfish have gotten a bad rap in the past few years. As many of you know, lionfish (Pterois volitans and Pterois miles) are invasive species in Atlantic and Caribbean waters which is unfortunately wreaking havoc on native species that don’t recognize them as the voracious predators that they are. In their native home, the Indian & Pacific Oceans, they have predators to control their population. I’m writing about them this week because I’ve heard so many people come into the gallery and tell me how they kill them, etc. One woman said “Beat em and eat em”, and others regularly refer to them as “bad”. Now I know she means we have to fish for them and find ways to to get them out of our oceans, but sometimes people are really taking it to the extreme. These fish do not deserve to be tortured because they were put into the wrong place (in case you don’t realize it, humans are the ones responsible for lionfish being in the wrong ocean- the lionfish didn’t fly here on magic wings). The reality is, we can humanely help fish the lionfish out of our ocean without torturing them. Here’s the way to efficiently (and humanely) remove them from our reefs and then serve them up as a delicious meal! 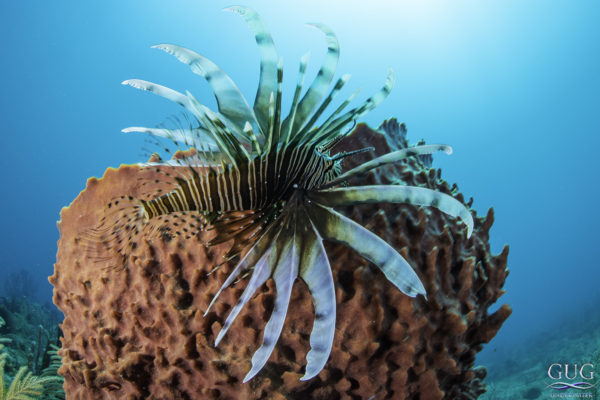 First, the tools of the trade:
1) Sea Snips are a rust-resistant form of surgical scissors.
2) Trident pole spear
3) a collection bag or ZooKeeper for storing your catch
Those who know us, know that Gug Underwater Inc is a conservation-based company.  We’re not against fishing when it’s done right, but we’re also not afraid to stand up and speak out against when it’s done wrong.  The Florida Fish & Wildlife Commission states that no fishing license is required to hunt or catch lionfish, and there are no bag limits.  This is essentially them telling us that by removing them from FL waters, you’re actually doing an environmental good deed!  But let’s do it the right way – after all, no animal deserves to suffer, and it’s not a “bad fish” – the word “bad” is a human word – a fish can’t be good or bad.  Reserve the word “bad” for the people who first introduced them to the Caribbean! 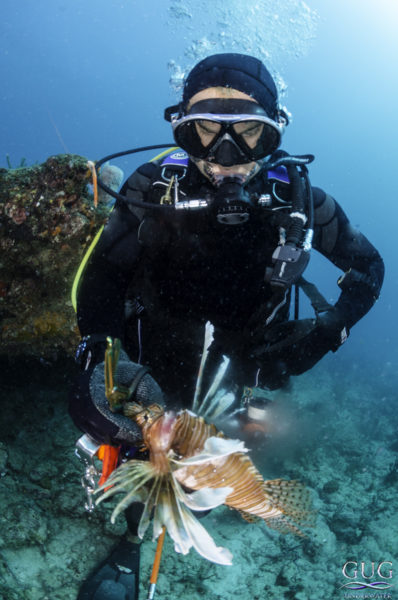 Once you’ve speared your fish, make use of those scissors.  Putting them into your collection bag without this first step would cause a cruel, slow, painful death.  While it’s still on your spear, the first step is to make an incision right behind their brain to kill it quickly.  Not only does this end its suffering, but it also protects you from being stung as it struggles, because yes, those venomous spines are still very capable of jabbing you!  But if you do get stung, stop your crying – it’s not *that* bad!  Maybe a little worse than a bee sting, but I’ve been stung before, and Gug has been stung plenty of times.  There are plenty of articles to google on how to use heat as a first-aid treatment to quickly neutralize the venom.  Once you’ve made the killing cut, then for your own safety, many hunters choose to then use the scissors to trim off the venomous spines, so you don’t get accidentally jabbed.  You can leave those right on the sea floor, and then bag your catch.  One final hunting tip, is to use a thick, clear bag, like a beach dry-bag.  Using a mesh bag is bound to get the remaining spines and fins caught up, resulting in tangling, and jabbing your hand when you try to remove your catch.  Or you could splurge on a purpose-built lionfish collection tool like the ZooKeeper and make life even easier!  Also, a quick note – the smell of fish blood in the water, in some cases, can definitely increase your chances of seeing a sharky friend – that’s why you’re supposed to invite me to come on your boat and I’ll get the video footage of it circling you! 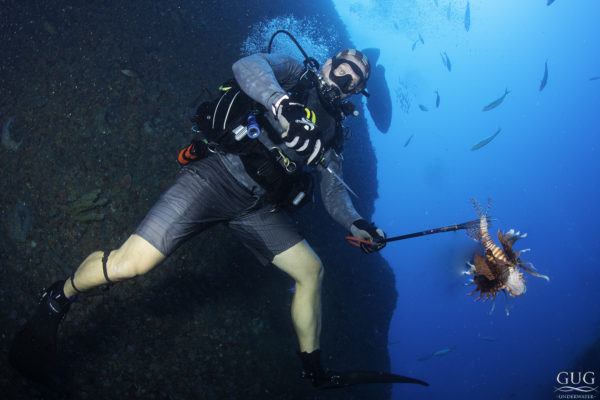 Now to the fun part – now that you’ve done your environmental good deed by removing a voracious invasive species from our reefs, killed it quickly and humanely, and safely bagged it, you now get to eat it!  Lionfish is considered one of the most delicious of all seafoods.  Want to learn some recipies?  Try this:
https://www.reef.org/products/lionfish-cookbook-2nd-edition

And a final thing you won’t hear anywhere else – my own little “cool factor” – remember how I earlier said to snip off all the lionfish’s spines?  Well, all that venom is neutralized with heat – just toss them in the frying pan for a bit.  So if you’re serving responsible adults who can handle a sharp poker without poking their eye out, how about serving the lionfish on the end of “toothpicks” that are actually their spines?  Your guests will be impressed!

On a side note, all of the images we sell of lionfish in our collection were taken in their native homes of the Pacific and Indian Oceans.