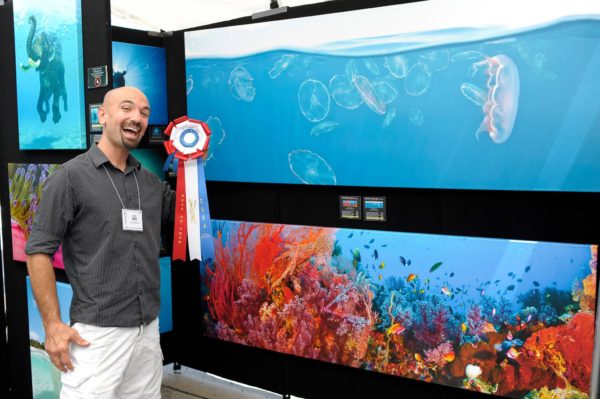 Gug wins another one- Best In Show in Michigan 2014

Regarded as America’s foremost underwater photographer, Gug has been making waves in the art scene for well over a decade. With Chris being the most common name of his generation, “Gug” (pronounced “Goog”) has stuck since grade school. And since grade school, he has spent tens of thousands of hours creating marine life images that awe, inspire and sometimes confuse.

With no formal photography education, Gug felt that total immersion into his subject matter was the only way to master the art, and moved to the Caribbean to live on a boat where he could dive and shoot every day for seven years. After a year back in the USA where he exhibited his portfolio, he again took off, craving more exotic subject matter, and landed in Papua New Guinea, where he again lived on a boat, for two years shooting underwater every day. Gug has now created images in over 40 different countries, been published in numerous magazines, and been displayed in several of the world’s most prestigious museums. The result has been that his art is now being collected across the world, and the value of his limited edition photographs has seen a steady increase, making them a worthy investment for any art collector.

Based out of Fort Lauderdale, Florida, he is now able to serve new clients and long-time collectors alike with a fine art gallery dedicated exclusively to his underwater images from around the world. Want to know more? Come meet Gug at the gallery or one of his upcoming exhibits. To receive updates for meeting him in person, “like” GugUnderwater on Facebook, or sign up for the monthly newsletter by sending a note to design@GugUnderwater.com.

Have Questions? Give Us A Call.