A Day With the Manatees 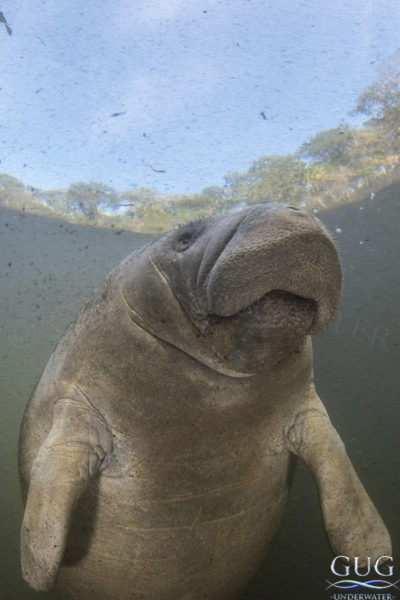 “Oh, the weather is frightful…But the springs are soooo delightful…and since we’ve no place to go…. let it manatee, let it manatee, let it manatee”.  Well, maybe that last line didn’t quite rhyme, but how else are we Floridians to get in our winter folk songs?  And yes, we’re right in the middle of manatee Season here in FL!  Its been about 4 or 5 years since I did a manatee shoot, for a combination of reasons, but this year, I took a single long day to go visit my friends, and my face is still hurting from the smiles.

Taking a breath – only the nostrils come above the waterline

So, the manatee, or more specifically, the Florida subspecies of the West Indian Manatee, Trichechus manatus ssp. latirostris is well known by some, but a great mystery to others, so first, a little background info.  Listed as Endangered by the worldwide authority, the IUCN Red List of Threathened Species, our local manatees are quite possibly, the cutest, ugliest, gentile giants on Earth, and are truly unique in that many wild individuals actually seek out and crave interaction with humans.  Each year, as the water in the Gulf of Mexico and Atlantic Ocean cools in the winter, they seek out the warm freshwater springs along the FL coast, and congregate, sometimes in the hundreds, until the water warms again.  Finding a manatee is pretty tough during the warmer times, as they spread out living primarily solitary lives, but when they seek out the warmth of the springs, it’s hard to miss them.  But while “hard to miss” is good for me as a photographer, it’s bad for the manatee, because as anyone who has seen one knows, they all possess horrific scars where they’ve been hit by boaters.

Pretty low water visibility, but you’ve got to make the most out of it!

There are many places to see manatees along the FL coast, and I see them from my balcony in Lauderdale by the Sea all year long, cruising north or south, just 5 meters from the shore in 1 or 2 meters of water.  Paddle-boarders and kayakers have chance encounters with them from Panama City Beach to St. Augustine.  But for the best chances of an in-water encounter, go north of Tampa to Crystal River’s King’s Bay State Park (where Three Sisters Springs is located) or the nearby Homosassa Springs.  The most common question is, what’s the water temp, and do I need a wetsuit?  My answer is, if you’re just going to hop off your kayak for 15 minutes, then nope, you’ll be fine.  But as an underwater photographer, I’m in from sun-up to sun-down, so I use a 6.5mm semi-dry wetsuit and hood (that’s like a michelin-man suit for those not familiar.)

Some of the poor visibility is caused by this dirty, dirty manatee!

Its also smart to know the laws.  First, google and watch the video called, “Manatee Manners”, put out by Fish & Wildlife.  There, you’ll learn how to responsibly act around the manatees, for their benefit, and so you don’t end up in jail.  Jail???  Yep, and/or a huge fine!  Violations of the Marine Mammal Protection Act, and the Endangered Species Act can (and should!!!) land you in seriously hot water, and King’s Bay Park has its own set of more restrictive laws that you MUST familiarize yourself with before heading up.  But here’s a breakdown of the basics (and DO NOT take this as a set of rules/laws – I am not a lawmaker, and I am not a substitute for actually familiarizing yourself for the laws!!!!!):
*It’s state law to use a dive flag – a policy that I’m often personally firmly against, but if you don’t want a fine, CYA.
*Never harass, corner, sit or stand on, or pressure a manatee in any way.  If you’re wondering if your particular activity constitutes harassment, then the answer is YES.
*Never get in between a mother and calf.
*Never disturb a sleeping manatee.
*Only interact with a manatee if it approaches you and initiates contact
*Never use two hands – that can be construed as grabbing or restraining by both F&W officials, and the manatees themselves.
*From a photographer’s perspective – don’t scream through your snorkel, and be aware of all the silt you’re stirring up.  No wildlife on Earth reacts well to loud screams (even though they’ll be screams of joy, happiness, and excitement!), and stirring up the silt just screws up visibility for everyone, and ruins my photos!!!  Just float there PASSIVELY – don’t move, and let them come to you.
*Once you’ve got all that down, giving gentile rubs is fine, and if you behave the right way, the manatees will likely do a LOT more than rub you back!

I REPEAT….I am not a legal authority – these are just my tips for interacting – consult with actual authorities to learn the actual rules/laws.

This one has me in an MMA leg-lock love-pin…..and I tapped out

So this year, my only day with the manatees began with a Wednesday night prep.  Time got away from me, backlogged with framing and shipping prints, so I cancelled my Thursday/Friday plans and made it just a single Friday.  Thursday night, I loaded up my kayak in my trusty old Toyota 4-Runner with 250K miles on it, and got to sleep by about 9:30pm.  Woke up at 1am, and immediately started my 5-hour drive.  Got there before sunrise, but there was no one around to zip up my suit!  It was like a ghost-town!  Finally went back out to the main road and flagged down a car and asked a stranger to zip me – I love asking non-diver perfect strangers to do that!  I made it in just before sunrise, and spent exactly 10 hours rubbing, getting hugs, and shooting.  Visibility was pretty low, since there hadn’t been any rain in about 8-9 days, causing the aquifer to pump slowly, plus lots of manatees means they stir up the silt and poo a lot (water did taste a bit nutty, come to think of it).  I wanted to stay later, to catch the colors of the sky turning orange, but 5:00 was my pre-arranged limit.  By 5:30pm, I had found a victim to unzip me, and had all my gear and kayak loaded back up, and was driving south.  Made it home by 10:30, was asleep by 11:15, and had my alarm set for 3am to set up for my Saturday art exhibit.  For anyone who ever says, “wow, how do I get a job like that” thinking they’re jealous of the life of a professional wildlife photographer – remember this schedule, and understand that its similar to this craziness practically every day!!!!  What a whirlwind tour….but well worth it! 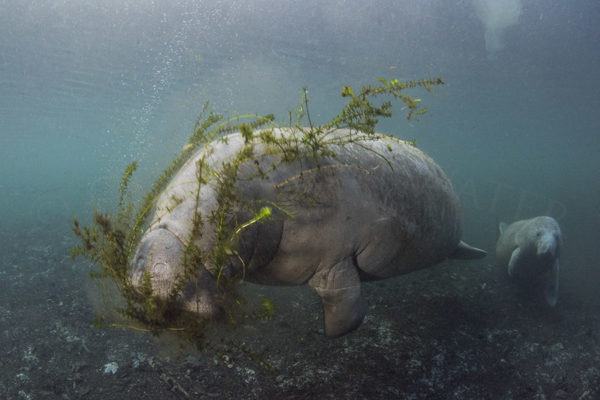 They’ll eat any vegetation that flows downstream into their mouths, but there’s not much else around, when it gets crowded

Manatee kisses….they’re really affectionate to each other, and show a wide range of emotions

So what do the manatees get out of this interaction?  Why do they want to play, and be rubbed, and allow us to touch their newborn calves?  Why, after our ancestors hunted them to the brink of extinction, and we continue to destroy their habitat, and slice them open with boat propellers, do they still seem to love us so much?  I try not to anthropomorphize any wildlife too much, but its hard not to when one if hugging your leg and chewing on your toes!  Actually, its pretty tough to photograph one when its giving you a full-on bear hug!  I need just 6″ of space!  But pushing a 2000lb sack of blubbery love off you isn’t as easy as you might think!  And most of the time, I’m enjoying the hug so much, that I can’t even think about taking a picture!  To complicate matters, other manatees seem to get jealous of the one getting all the rubs, so often, I’ll have 3 or 4 trying to love on me at the same time!  But always remember – your actions dictate the encounter.  Just like with sharks, damselfish, eagles, moose, or anything else in the wild, if you’re loud, boisterous, floundering, flailing, fast-moving or otherwise obnoxious, your chances of quality interactions go down and down and down.  It all goes back to the most common and completely unanswerable question I get asked about my photos – “How’d you do that?”.  Since its far too broad and I have no idea what aspect of the photo I’m being asked about, my answer is a canned, “well, its 10% photographic skill, and 90% fish psychology”.  To me, the “fish psychology” (which encompasses dolphin, turtle, crocodile, shrimp, and clam psychology too) is everything.  Your first manatee encounter is usually fun, and sure, you get to play with one, and likely give and receive rubs & hugs, but after a few days of experience, and reflection on the encounters in between, you really start to gain an understanding of how they think & feel.  If you’re using a selfie stick to document your time with wildlife, then you’ll probably never understand anything about the wildlife, and there was never a connection except on your facebook page.  Put away the selfie stick for a while.  Listen to what the animal is telling you.  Empathize with it.  Put yourself in its shoes.  Before photographing, practice some quiet, passive observation.  Then when the moment is right, swim back to your kayak and go ahead and grab the camera and create something special.  But in my opinion, the satisfaction I’ve received from capturing even my very best manatee photos ever, pales in comparison to the sheer joy I get out of just interacting, laughing, rubbing, being chewed on, and playing with the manatees – and that has nothing to do with my camera.

The cutest wrinkled-up baby EVER! Most of the young babies have this super-wrinkled skin