Going on a shooting expedition during the Christmas chaos is the norm.  We always look for a place off the beaten path, where instead a of road-rage filled shopping frenzy, I can get my creative juices flowing and ring in the new year with some fresh new images.  Cabo Pulmo fit the bill quite nicely!  With a population roughly 5% the size of my high school, this place is quite remote, a wee bit hard to get to, and the type of place that gives a real sense of adventure & isolation without traveling 5 days to get there.

Diving in Cabo Pulmo National Park is known for two things: 1) giant schools of jacks 2) an aggregation of mobula rays.  What I didn’t know, is that during this time of year, it’s also known for one other thing….. poor water visibility!  Now I’m no stranger to low-viz photography, and often times, people look at my prints and exclaim how clear the water is, only to have me explain to them that it’s my job to “make pretty” and what appears in my photo to be gin-clear water, is in actuality, very murky.  With practice, and through a combination of strange angles, lens choice, and creative lighting, one can learn to create some pretty cool images despite the low-viz.  But how to do that on a school of 40,000 jacks that occupies a space the size of a football field? 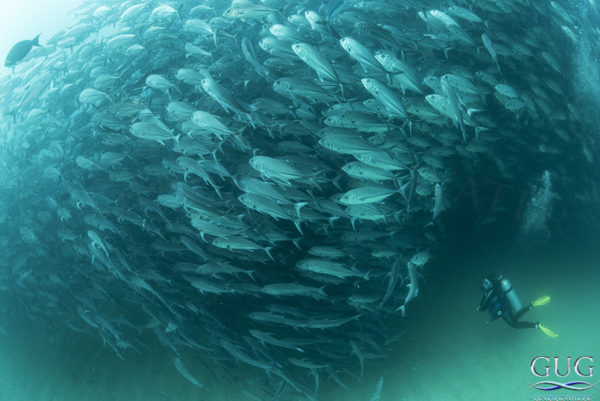 Didn’t get this clarity until the final day 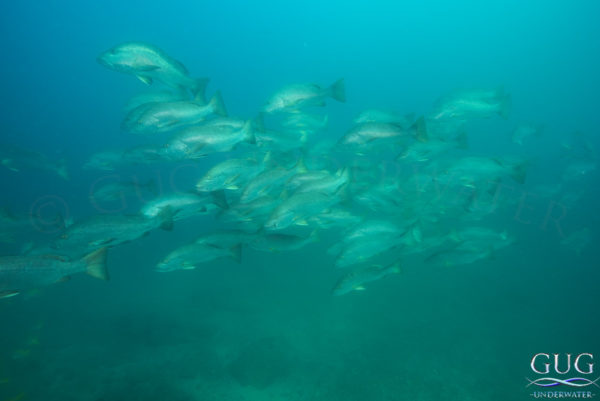 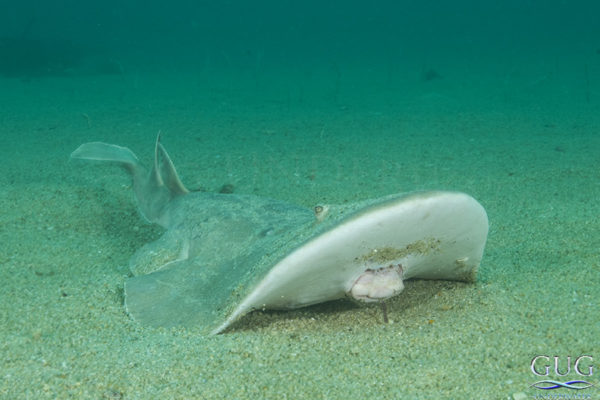 A greater electric ray sucks up a garden eel

So for the first 8 days of diving, I’d finish disappointed.  I’d have some good opportunities with the fish schools, but the low viz was just not letting me create the images that were in my head.  The reef there isn’t full of red & orange tropical corals – it’s mostly sand & rock, with some small 1’ tall stony corals and small fans – so technically, yes, it’s a coral reef, but not what you saw in Finding Nemo.  There were some big fish like greater amberjack, large grouper, and a crazy school of about 50 adult dog snapper, but the viz made it pretty tough to shoot them.  Even so, it’s amazing how a properly run National Park can benefit fish populations – most of these “commercial viable” species were completely wiped out of this area just 25 years ago, when the Mexican government stepped in and created the park.  Since then, year after year, the sea has been thriving here in this sanctuary, and populations continue to rise – a rare example of conservation done the right way, and primarily self-policed by the thriving ecotourism industry.  However, while diving in the Cabo Pulmo National Marine Park, its law that I stay with an official guide.  Often, I’d lose track of him within a few minutes, even though he was probably only 15 or 20 feet away.  So instead of concentrating on creating images, I spent half my time looking for the guide.  As I’ve always argued, solo-diving is the safest and most productive way for me to work.  I feel this is the case for even casual divers without a camera, but especially for me as a photographer.

Easy pickins’ for these pelicans

But on the next day, we decided to do something a little different.  Instead of diving the regular sites, we saw a gentile boil near shore in a protected bay with pelicans diving down – a sure sign that there was a big school of small baitfish below.  And it turned out to be a great day of shooting!  I know the guide was rolling his eyes thinking, “what?  This gringo wants to dive in 6’ of water next to a pile of rocks? Gug es loco en la cabasa!”.  Turns out, the area was teeming with life!  The school of sardines was thick and seemingly went on forever.  There was a school of one of my favorite fish in the sea, lookdowns, and they formed up pretty nicely for a few pics.  So basically, the guide and captain got a lazy day sitting on the boat at anchor, and I doodled around in water I could stand up in. 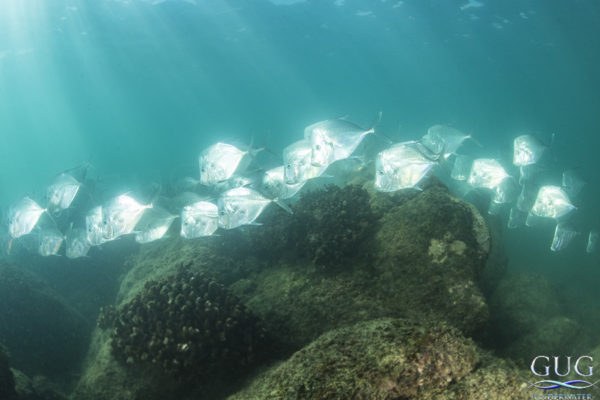 Lookdowns – one of my all-time favorite fish

While there, I followed the sardine school to the sandy-rocky shore, and discovered that the small waves were actually shaping quite nicely.  After firing a few test frames, I realized I was in a good position to shoot more images akin to “New Wave” from the Endless Summer Collection.  And it worked!  Switching my brain from shooting split-shots of a school of sardines below pelicans to shooting wave barrels requires a 180-degree thought process change.  But by the end of the day, I’d captured the cleanest, most perfect window through the back of a wave barrel that I’d even shot, and it’s now a new release called, “Window” in the Endless Summer Collection! 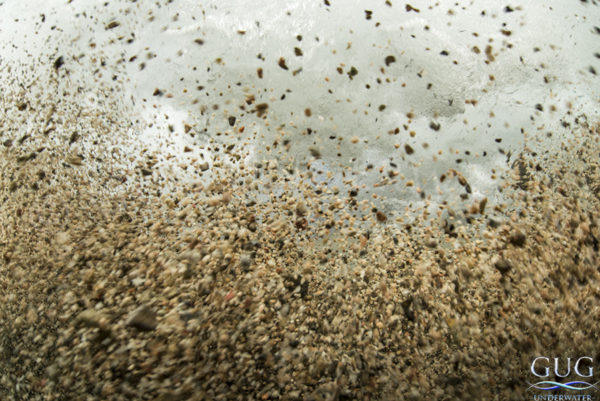 The aftermath of “Window”. Oh how my gear suffers……

With two days of shooting remaining, I was feeling a little bummed, assuming the viz would continue to be the dismal 10-15’, but to my pleasant surprise, it had opened up to nearly 40’!!!  Along with it, the water had increased from a chilly 71-degrees to a quite tolerable 75-76!  And that sounds good and all, but as often happens, the school of jacks was now nowhere to be found.   Often with a big change of conditions, the marine life comes or goes with that change, and it seemed that the fish decided they liked the previous week’s conditions better and followed that water somewhere else.  For the first half the day, it was quiet – no schools, no mobulas (which I affectionately came to call, “nobulas”)….it was like the reef was asleep.  Then after lunch, since the jacks weren’t where they normally hang, we went looking for mobulas in the shallows, and guess what we found???  The jacks!  It was a school of smaller sub-adults, but hey, I’ll take it!  For the next XXX minutes, we were all alone with a school of perhaps 10,000 fish and it was magic (XXX because the amount of time may or may not have been in violation of the 50-minute max bottom time mandated by law within the National Park). 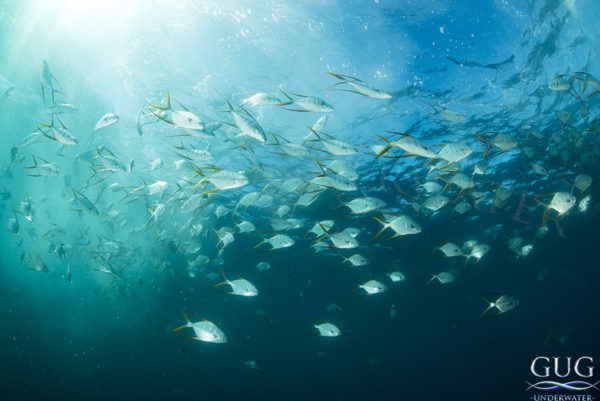 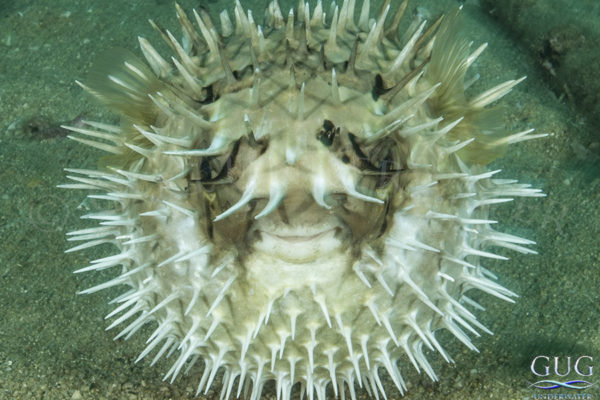 I almost didn’t want to show this photo, because an informed viewer might assume that I caused him to puff up, but I would NEVER do that – it causes a huge amount of stress to the animal. I’m not really sure why he puffed up, but I was sure keen to take advantage and snap a few pics!

On the final day, the viz was about 30’ – good enough to shoot those jacks again!  But once again, they were nowhere to be found.  With a few others joining on the boat, they wanted to do a “dive site” (booooorrrrrrrriiiiiinnnnnnggggg!!!!!!) and the official guide mentioned in the briefing that there’s sometimes a school of pompano that hangs near the surface on this pinnacle.  OOH!!  OOH!!  And I saw them immediately after jumping in!  And it was AWESOME!!!!!!  They’re such charismatic little buggers, and the light was right, and the background was this beautiful crashing wave bubbly water mess…..just perfect!  I signaled to the guide that I’d stay right there and shoot them while they went on the dive, and to my surprise, I was allowed to bend the rules a bit and do my thing.  And what a payoff!!!!  Frame after frame was a super-cool shot, so much so that it was difficult to narrow it down to the one we’re going to print.  At the time of this writing, I’ve got it narrowed down to my top 3…..ooooohhhh what beauties!!!  And a quick tip of the hat to my ichthyologist friends Dr. Kirk Kilfoyle and Dr. Mike Schmale for the ID – the several species of permit, pompano, and palometa can be super tough to distinguish from each other – having brains like that on speed-dial has made my career immeasurably easier, and there’s no learning like learning from a specialized marine biologist!  They turned out to be gafftopsail pompano, in case it was killing you as bad as it was killing me! 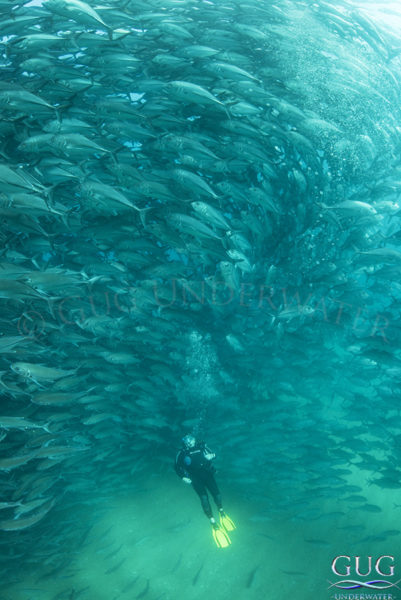 By the final day, viz had finally somewhat cleared up

Soon after that, we dropped the other divers off on shore, and went back out to look for the jack school, and whereas they were absent in the morning, this time it took us, ooooohhhh 5 minutes to find them!  It’s easy when their dorsals are poking out the surface and their sheer mass creates a black patch of the ocean 200’ across!  Suzanne offered to forego shooting video and went camera-less to model with the fish, as she has countless times before, and it really paid off.  Having a diver in the shot to compare to the massive school makes all the difference, otherwise, how can anyone tell how big the fish are, or how massive this tornado really is!  So shot after shot, clip after clip, we communicated with perfect efficiency due to years of practice, and we nailed some shots together that we’re really happy with.  Still, I can’t help but wonder what the shots would be like if the viz was better – it’s part of the bane of social media and the interwebs – the pics we see of this place are no doubt the 1% where the conditions are clear with 100’+ viz and the fish are where they’re supposed to be, and just diving there for only 10 days isn’t likely going to bring me that 1%. 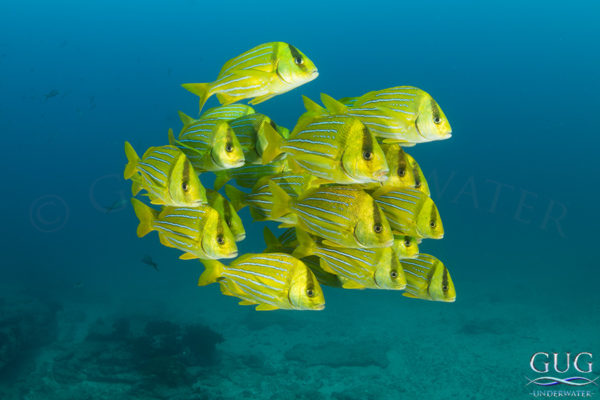 Porkfish form the most photogenic schools!

For my final day, the boats weren’t going out.  I tried…..I waited…..but nope.  And while I wanted to just roll around and play in the dirt with the local dogs, I decided to hit the computer and narrow down my top pics.  It’s a nice feeling that for once, I’ve arrived home with an edited, and fully archived/backed-up selection, rather than just a stack of memory cards to sit neglected on top of my computer waiting for download.  And now it’s time to pay the piper after being gone so long during the busy season – time to put in the 18-hour days fulfilling print orders, giving my awesome sales staff at the galleries some much-deserved time off, updating the website & social media, and of course……planning the next shooting trip!