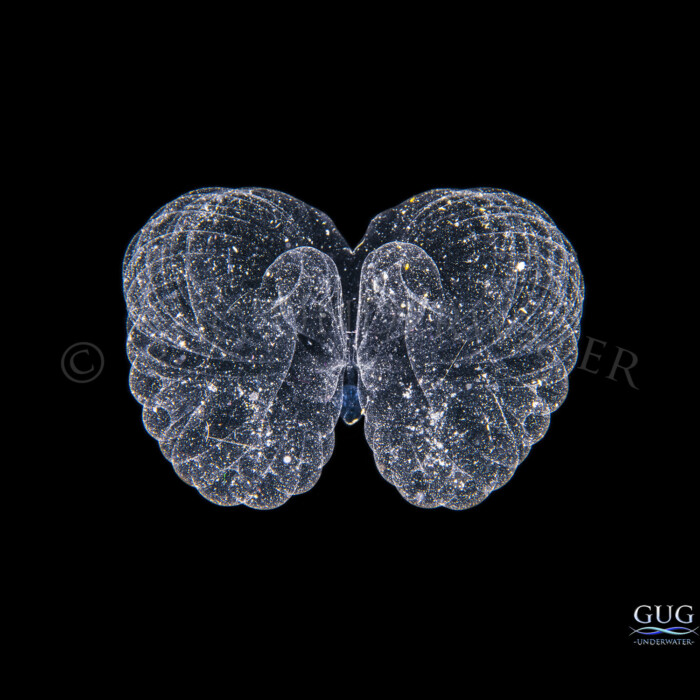 ALIEN #6:
The Larvacaen might just be my personal favorite from the Aliens Collection, and I affectionately call it “lungs”. But what we see as the lungs, isn’t actually the animal itself – the larvacaen itself, is the light blue blob hiding behind and at the bottom crack of the lungs. Its shaped like a tadpole, ~2-3cm long, and pulses water into the “lungs” with a rhythmic motion of it’s tail. The lungs, are not part of it’s body, but rather a mucus feeding web that it spins to catch organic debris and tiny organisms. I spent several dives obsessed with understanding what I was actually photographing, until one night, I accidentally bumped into the lungs (which measure up to 30cm wide), and I saw a white-ish flash rapidly swim away, abandoning the lungs. Only then was I able to start realizing that the lungs themselves were not the actual organism, but rather just its feeding mechanism. Now when I find one, I float motionlessly (carefully, so as not to cause it to flee its web in defense) and marvel at the creature itself – spinning it’s web, as beautiful as any spider’s orb web on land, and with much the same intention. On most nights over the abyss, larvacaens are nowhere to be found, but every so often, they’re super-abundant, typically just deeper than 50′. Purchase an art print of these deep water creatures today.